This website uses technical and assimilated cookies as well as user-profiling third party cookies in a grouped format to simplify online navigation and to protect the use of services. To find out more or to refuse consent to the use of one or any of the cookies, click here. Closing this banner, browsing this page or clicking on anything will be taken as consent to the use of cookies.

Fra’ John T. Dunlap is the new Lieutenant of the Grand Master 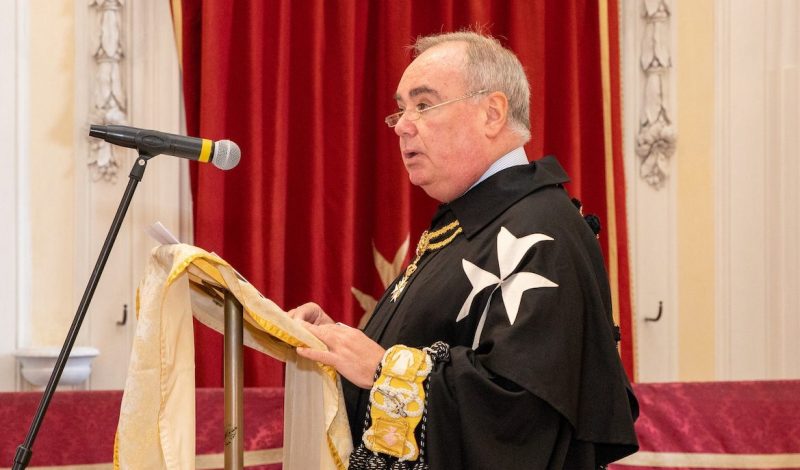 Fra’ John T. Dunlap, member of the Sovereign Council, was appointed by Pope Francis Lieutenant of the Grand Master of the Sovereign Order of Malta. He succeeds Fra’ Marco Luzzago who passed away on 7 June last.
In his letter of appointment, Pope Francis states that ‘the sudden departure of the Lieutenant of the Grand Master, Fra’ Marco Luzzago, a few months before the celebration of the Extraordinary Chapter General, brings the Order of Malta to a new moment of dismay and uncertainty. Pope Francis’ decision will allow the Order of Malta to accelerate the reform process and return to an ordinary administration under a Grand Master soon afterwards. The Order of Malta is grateful to the Holy Father for his paternal solicitude.
The new Lieutenant Grand Master together with the Pope’s Special Delegate and the Sovereign Council will continue the process of constitutional reform of the Sovereign Order of Malta.
Fra’ John T. Dunlap was born in Ottawa, Canada, in 1957. After his studies at the University of Nice he graduated from the University of Ottawa, he then obtained his Juris Doctor degree from the University of Western Ontario. He was awarded an honorary doctorate in Public Service by the John Cabot University in Rome. He is an attorney admitted to the New York State Bar and a barrister and solicitor of the bar of the province of Ontario. In 1986, he joined the law firm of Dunnington, Bartholow & Miller in New York, becoming a partner in 1993. He specialised in corporate and immigration law. An internationally respected lawyer, he is since 1997 a legal advisor to the Permanent Observer Mission of the Holy See to the United Nations.
Admitted to the Order of Malta in 1996, he took temporary vows as a Knight of Justice in 2004. In 2006, he was elected first Regent (religious superior), of the Sub-Priory of Our Lady of Lourdes based in New York. On 7 June 2008, he took his solemn vows as the first American member.
In 2009 Dunlap was elected for a five-year term as a member of the Sovereign Council. He was re-elected for another five-year term by the Chapter General – the Order’s elective body – in 2014 and 2019.
For over a decade he has served the Order of Malta as Chairman of the Committee for the Protection of Names and Emblems and Representative to the Alliance of the Orders of St. John.

Embassy of the Sovereign Order of Malta to Romania